Shimon Solomon: from survival to leadership 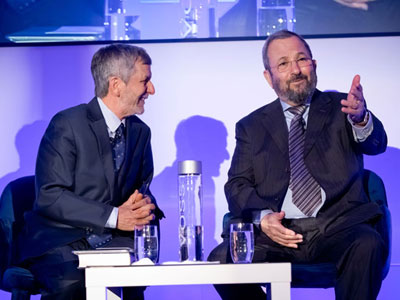 Former PM of Israel, Ehud Barak, in conversation with Ned Temko, did not disappoint guests at the Youth Aliyah Child Rescue 85th Anniversary Dinner held at The Dorchester on Tuesday 23rd May.

Over £450,000 was raised for the therapeutic arts and music programmes that change the lives of at-risk children at Aloney Yitzchak Youth Village, as well as helping to renovate the library to become the cultural hub of the village.

A highlight of the evening was the musical performance of four students from Aloney Yitzchak. These inspiring young people have overcome incredible hardship with the support of Aloney Yitzchak and its therapeutic music programme.

Guests received a copy of Ehud Barak’s first book, My Country, My Life: Fighting for Israel, Searching for Peace. Ehud Barak began by revealing that his wife’s mother had worked for one of the early leaders of Youth Aliyah in the 1930s. He praised it as a charity that did not merely erect buildings or plazas in Israel but dramatically changed and improved young people’s lives.

In a wide-ranging discussion of his own career, and Israel’s main challenges, he stressed the need to ensure the country’s security while also pursuing a two-state arrangement that would ensure Israel also remained both a Jewish and democratic state.
Chief Executive Officer, Daliah Mehdi introduced a moving video about the important work being done at Aloney Yitzchak after telling guests about the traumatic backgrounds of the children we help.

Dinner Chairs, Tina Curtis and Lorraine Robinson thanked supporters for their dedication to the charity and for helping vulnerable children to shape their own futures.